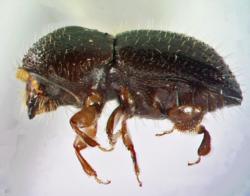 What is the polyphagous shot hole borer & how much damage can one tiny bug cause?

Akif Eskalen steps through the dense, damp leaves in a wooded neighborhood, scrutinizing the branches around him. He’s looking for evidence of an attack: tiny wounds piercing the bark and sap dried around them like bloodstains.  It is The Polyphagous Shot Hole Borer.    What?  You’ve never heard of it?

The victims are bo

x elders, sycamores and coast live oaks, all in some state of suffering. Eskalen approaches a tree riddled with 1-millimeter holes, as if someone used it for miniature target practice. It’s time to nab a perp. He selects a hole, pulls out a large knife and expertly levers out a chunk of wood.

There, in his hand, is a glossy beetle no larger than a sesame seed:The Polyphagous Shot Hole Borer.

Though small and sluggish, its appetites are wide and its spread is relentless. It attacks forest trees, city trees and key agricultural trees. It has defied all conventional and chemical weapons. No one seems to have a way to stop it.

Eskalen tips the beetle into a glass vial. He detaches a pink spray bottle from his backpack and administers a few lethal squirts of ethanol before twisting the vial shut.

These beetles have a strange M.O. They don’t eat wood, like termites; instead, they drill circular tunnels toward the heart of the tree. They carry fungal spores in their mouths and sow them like seeds as they go. Then they harvest the fungus to feed their larvae. It’s a deadly partnership: The beetles attack, but the fungus also helps to kill, colonizing the wood tissue and spreading through the plant.

The Polyphagous Shot Hole Borer. have easily evaded the authorities. Inside the tree, they’re well protected from pesticide sprays. The incestuous offspring mate with their siblings inside the trunk, so sex pheromones do not lure them out.

“If we can’t control them,” Eskalen said, “they are going to wipe out all our trees.” 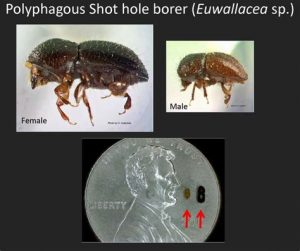 The consequences of a wide-ranging infestation could be enormous. Common city trees, such as American sweetgum and maple, would become public branch-dropping hazards. Native trees such as the California sycamore and the coast live oak have started to succumb, creating a fire risk in the form of dead, dry tinder. Avocados and other crops could face huge financial losses.

A genetic analysis traced the bugs to Vietnam. Unlike other insects that target just a few species, the shot-hole borer beetle is an equal opportunity pest, infesting at least 286 tree species and posing the potential for widespread destruction.

Its hosts include California natives such as coast live oaks and sycamores, and key agricultural crops, including avocado. The shot-hole borer beetle injects trees with a fungus, which it them “farms” for food. The beetle’s adaptability and wide host range make it tricky to identify, because symptoms of infestation vary among the hundreds of trees it attacks. A handout on Eskalen’s website shows the beetles’ effects on different trees …Some ooze with gummy deposits on their bark… Others display dark or reddish stains on their trunks. …Still others erupt in clusters of crystals called “sugar volcanoes.” The beetles are prolific breeders too, and can lay eggs several times per year, experts said.

“The female will bore into hundreds of typical, common tree species,” Launder said. “In most of those species, the fungus will grow. The fungus is the food source for their offspring. The tree ends up just bleeding.” 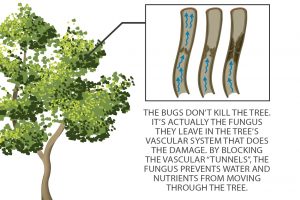 San Diego is already battling the gold-spotted oak borer, which has felled thousands of California live oak, black oak and canyon live oak in the backcountry, and in parkland.

The oak-borer beetle spreads on firewood, and apparently hitchhiked that way from San Diego County to the mountain town of Idyllwild, in Riverside County, late last year. Forestry and agricultural officials have urged residents not to transport wood, and say that message is doubly important in light of the new pest.

plastic for at least 2 months to kill any remaining beetles.

If you suspect that you have found this beetle or seen symptoms of the disease on your tree or in surrounding areas please contact either your local Cooperatve Extension Office or Dr. Akif Eskalen by phone 951-827-3499 or email at akif.eskalen@ucr.edu.